From seed to Christmas tree
The name of Nordmann fir derives from the Finnish botanist Nordmann, who discovered the then unknown tree in the Caucasus. Seeds from the Nordmann fir come from the western slopes of the Caucasus in Georgia. They have become the favorite Nordmann fir for most of the Europeans. Undoubtedly because of the beautiful shape of the tree and its durability.

At the same time it must be said that NORDMANN FIR is also the most difficult tree to produce. The reason is among other things that the climate must be of a special nature which is to be found amomg other places in Denmark. Over the years Denmark has become number one in the production of Nordmann fir. In the development of machinery and technology in the Christmas tree industry Denmark is also in the lead due to the relatively high level of wages.

Nordmann fir and frost
The tree is very vulnerable in the period with newly sprung buts.Even a very light frost (between 0 and minus 1) will result in major damage on the whole plantation.

Recent research has shown that by using a new fertilizer OPTIMIN (www.hd2412.co.uk) sprayed on the trees we may secure the plants to a low of minus 3 degrees. Another problem may be the winter frost below minus 22 degrees which causes the demolition of the new buts, especially the top one. This is a major disaster for the Nordmann fir, as it does not easily develop a new top shoot leader.

Set routines
For the same reason we mount the trees with small sticks in the top of the tree in order to protect the leader during the early months of the growth. During the last 10 to 15 years, we have developed a set routine with growth regulation. With other types of trees it is possible to regulate the growth by cutting the leader to the desired length. If this is done properly close to a but, the tree will develop a new leader.

In a culture with Nordmann fir we use TopStar, which has been designed to harden the leader sooner than it would otherwise have happened. We employ the means TopStar by using an instrument called Easy Roller (www.hd2412.co.uk).

The Nordmann Fir demands an expert, when you shape it. It has to be manually trimmed and shaped in order to get a beautiful Christmas tree. 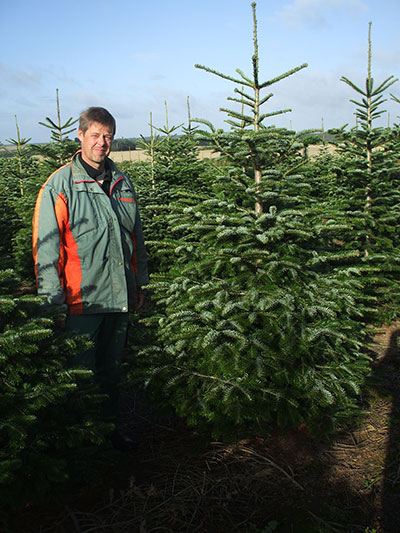